House sparrows used to be common.  Because they are social birds, and like to go around in gangs and nest in large groups, it is difficult to believe that these archetypal “little brown jobs” are endangered.  A 71% decline in numbers has been noted in the UK between 1977 and 2008 (RSPB), led to them being red-listed, although the decline is thought to have slowed more recently.

There have been lots of theories for the decline:  increased predation, changes in farming practices, lack of food, lack of nesting sites, increased competition and air pollution have all been put forward.  The favoured theories involve issues around lack of food (due to pesticide use, decline in green gardens, building on former gardens and competition) and lack of nesting sites (due to energy-efficiency measures and new housing lacking the favoured spaces for house sparrows to breed).  Ref.

A few years ago, we had no house sparrows in our garden.  We have been diligent in providing food and green areas for them in the garden, and then have now migrated back, although they rarely move very far, so we were fortunate that they were still present a few hundred yards away.  As for nest sites, we have never blocked up the eaves of our house, but in more recent years, the space underneath the solar panels on our roof have provided a very popular place for house sparrows.  Last year, for the first time in 10 years since we put it up, the house sparrow terrace nest box was also occupied.

It is lovely to see gangs of sparrows swooping around the garden again.  The chickens seem happy to share their food with them – I often get buzzed by the sparrows as I go into the chicken run to feed the girls.  They queue up on the door of the chicken run in the morning, waiting for me to open up!

At this time of year they are busy collecting nesting material, and one thing they really like are pieces of pampas grass.  We have one huge pampas grass plant in the garden and the fronds are perpetually shaking with little flocks of ambitious sparrows trying to fly away with a beak full of fluff.  I managed to capture a few shots of them through the back door this week.

I hope we have a whole crowd of them nesting noisily under our solar panels and eaves this year.  They are happy, slightly unruly little birds.  Maybe one day they will move into the woods, from which they are currently absent.  That would be very welcome. 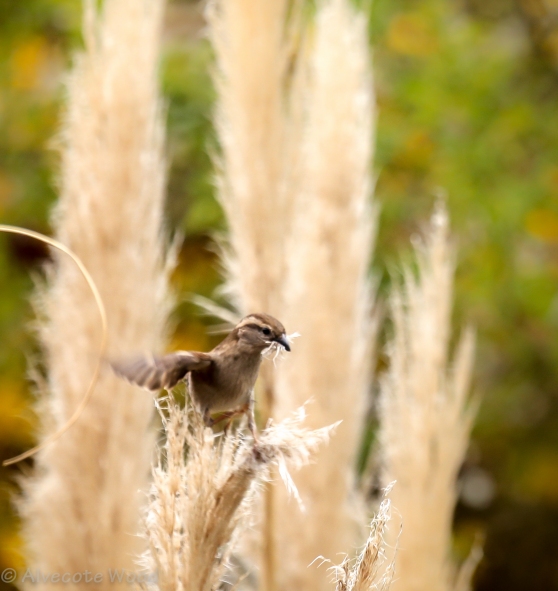 Another arrival on our pampas grass 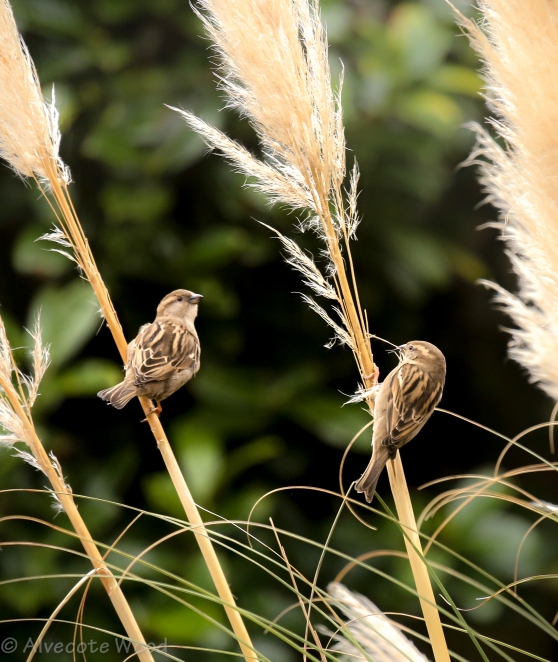 A couple of house sparrows on our pampas grass