Sometimes things are wonderful, sometimes not so good.  This week has been a real mixture.  Getting the bad out of the way first, the theft of a fence post reported last time was not so innocent as it first seemed.  Our initial impression was that it was stolen in the hope that we wouldn’t repair the fence properly, making it easy for poachers to get in and out.  What we didn’t notice, until Sunday, was that 21 trees along with canes and guards, had been stolen from the new planting in Betty’s Wood.  It had been done cleverly.  We planted trees in curving rows with variable spacing so the whole plantation looks natural when it grows up, while maintaining gaps for access by machinery if required.  Removing one row would not actually stand out very well, particularly if it is a little way away from the fence and hedge.

So it was that we spent a while repairing the fence, and still didn’t notice they were gone, partly as we had to drive down there in order to get the fencing tools and new post into position.  We only noticed the theft on Sunday when we walked along and realised that one of the gaps was much larger than it should be.

So, this was pre-meditated theft by people skilled in covering their tracks.  We have upped our defences, and hope they don’t come back. 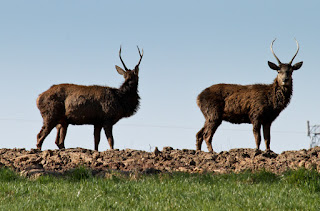 Another concern is the continued presence of two red deer stags in the area:  not just in the area.  On Saturday we spotted them heading away from the woods and we hoped they would find their way to a better home.  But on Sunday while having lunch, something startled them and they ran across the clearing in the wood, jumped the fence, crossed the road and disappeared.  There was something so magnificent and primeval about these creatures – the size of small horses – running gracefully across the clearing.  But they could do untold damage to the woods and in particular our young trees – indeed, they could destroy all of them very quickly.  We hope they will not do this, and there is currently an abundance of food for them to eat, as they are grazing on the farm crops.  But if they stay in the area, there could be trouble in the coming winter. 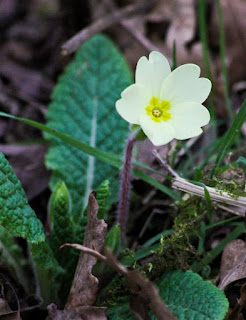 Now the good news!  Red listed bird species are those which have suffered major declines in the last 30 or so years.  Some formerly-common birds, such as house sparrows are now in that category, and we are pleased to have seen them come back to our garden, helped by regular feeding.  At the woods, we are delighted to have a number of red-listed species.  A single yellowhammer continues to visit our feeders, but even better, there are also a pair of yellowhammer in a different part of the wood.  A reed bunting (amber listed) has been visiting our feeders too.  And a lesser-spotted woodpecker was heard in the woods for the first time this weekend, joining its greater-spotted and green cousins.  There are more green woodpecker this year too – several calling in and around the area.  Nuthatch numbers seem to be up.  We have buzzards and sparrowhawks in regular attendance.  The willow tit is back on our feeders too although seems to be rather camera shy.  And our wild primroses are in flower.

A chance enounter with a birdwatching enthusiast this weekend gave us encouragement.  It is nice to have independent corroboration that since we took over ownership and management of the wood, there has been an increase in the variety of species and number of birds within species living there.  We thought that too, but how lovely to have it confirmed.  In a few short years we have been able to make a difference.  There may be bad stuff happening, but there are also good outcomes.  Let’s hope we can continue to make a difference.