Scrub habitat in Betty’s Wood – home to whitethroat and yellowhammer

Scrub, as a habitat, is nearly always followed by the words “clearance” or “eradication”. How often do we read the words “it’s only scrub,” as if this is some kind of second-rate habitat to which we must do something.

Scrub has a bad name. It has become something to be controlled, eliminated, pushed to the corners of our fields and woodlands. It doesn’t seem to be wanted, valued or loved.

Scrub is usually regenerating woodland, although in certain special situations, it may be the final, or climax, plant community. Woodland may be regenerating on a woodland site that has lost its trees, through felling, coppicing, or natural disaster, or on a previously open habitat which, for some reason or another, has ceased to be managed and is reverting to woodland. In pre-history, areas of woodland were cleared by humans, used for a while, then the people moved on, leaving the woodland to recover and regenerate via a scrub stage. Before humans made their mark, woodlands were cleared and reverted to scrub after grazing by large mammals, such as elephants. Wildwood has areas that become denuded of trees, and which regenerate. Scrub is always present, although not always in the same area, but there are always patches of scrub into which wildlife that prefers this habitat can move. Scrub will also form rapidly on almost any land that is left for any length of time: heathland, fen, coastal dunes, uplands, bogs, agricultural land and even on urban or rural habitation or industrial sites that have become abandoned.

The problem we have now is that people are not itinerant – they lived in fixed communities. Almost all land has an owner, and a defined use. Woodland is not free to regenerate where it will because land is almost always designated for a purpose – be it generation of timber in woodlands, or preservation as high forest as a nature reserve, or be it arable farmland, pasture, heathland, moorland, bog, fen, coastal dunes and other habitats deemed also to be of great value. There is precious little room for scrub to squeeze into, and people don’t want it. Because other habitats have become vanishingly rare, encroachment of scrub onto these habitats becomes something that threatens them. In towns and cities, we don’t want scrubby parkland, with ever-changing areas of wood, clearings and scrub – we want nice tidy places for people to walk, sit and play – manicured habitats, effectively over-sized gardens. Scrub is perceived as providing cover for anti-social behaviour. So it must be cleared. It doesn’t look pretty.

Even in woodland, there is little room for scrub. Coppicing produces a scrub-like regrowth from the cut stems, or stools, albeit with a more uniform height and species structure. Most of our woodland species are not species of the deep forest, they are species of the forest edge, and of scrub and coppice.   Our wildlife is adapted to the cycle of clearance and regrowth. But this is a cycle that we have broken. Coppice management has disappeared from many woodlands, leaving over-stood coppice and high forest – the familiar woodland that many of us visit and many think is the only way a woodland can or should be. We manage timber-producing woodland by clear-felling and re-planting in dense, ordered stands that produce a uniform structure. Scrub has barely a chance to grow before being overtaken by the faster-growing, more useful and more profitable softwood conifers. It is relegated to small strips around the edge and along woodland rides, if it is allowed to grow at all. Coppicing does survive, as does continuous cover forestry with natural regeneration, both of which help. But many woodlands are simply unmanaged. 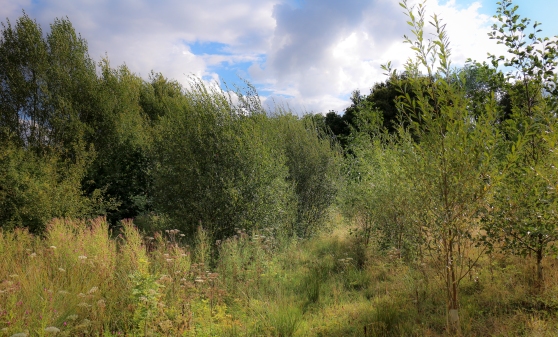 If this were wildwood, it wouldn’t be such a problem. Areas would naturally fall in high winds, succumb to fire or grazing, or be felled by itinerant humans or large animals. But it isn’t wildwood, and hasn’t been since humans appeared on the planet. Even worse, most areas of woodland are such small remnants of our forest cover that they are simply too small to support a mosaic of habitats, including scrub, as they stand. They are left to become high forest, with no mechanism to support regeneration, no mechanism to support a cycle of regrowth.

In addition, scrub is not allowed to develop anywhere else. Pieces of woodland are simply not allowed to “contaminate” farmland, river edges, heathland, moorland, fenland or urban and suburban parks and gardens. They are cleared up – sometimes with good justification but very often without. Agricultural stewardship schemes usually require the removal of scrub. Woodland schemes also fail to recognize the importance of scrub, or allow for its management.

So does this actually matter? Well, yes it does, because many important, declining species are actually species that prefer scrubland, and enjoy the variety of species, height of vegetation and density of vegetation that scrub can provide. These include plants themselves, lichens, bryophytes, insects, mammals, birds, amphibians and reptiles. The pearl-bordered fritillary butterfly, the adder and common toad, mammals such as dormice, and birds such as blackcap, bullfinch, linnet, reed bunting, song thrust, willow tit, yellowhammer, dunnock, goldcrest, nightingale, tree sparrow and turtle dove. Many of these are disappearing as we over-clear scrub habitats and under-manage woodland.

The problem is that scrub does need some kind of management, whether you want to keep it or not. This can include resumption of coppicing within woodlands or at the woodland edge to create scrub, cyclical cutting of scrub to ensure a steady supply for scrub species, selective conservation grazing of low intensity by relatively hardy livestock, or by leaving small areas of scrub to develop around the edges of other habitats. Keeping scrub as scrub, and developing a good mosaic requires management, or it will revert to woodland or coppice – so attention needs to be paid to ensure that a wide variety of species, density and height are achieved. This is not easy to do, and there is a lot of debate about how to do this, or whether to do it.

In our own woods, we have some good areas of regenerating scrub at the edge of Betty’s Wood. And into this scrub we have attracted willow tit, whitethroat, yellowhammer, bullfinch, linnet, song thrush, goldcrest, dunnock, woodcock and others. Coppicing will, in time, produce a rotation of scrubby habitats for species to move into, as well as allowing the next generation of mature trees to emerge, and producing a sustainable crop of wood for crafts and firewood. Our Coppice – varying ages and densities 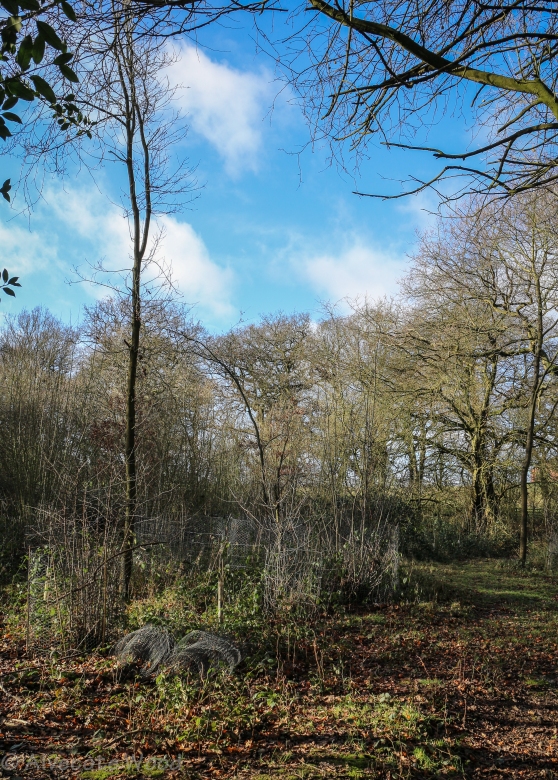 Coppice from 2 (foreground) and 4 (background) years ago showing regrowth

The problem is that management of scrub has been seen as synonymous with clearance or eradication, despite it being quite clear in the Scrub Management Handbook, and the JNCC Report, that this is only ONE option, and even then, where possible a patchwork of scrub areas should usually be allowed to remain. Maybe this is because the focus has been on removal of scrub, so there has been more research into, and thus the handbook provides more information on this aspect of management. Certainly the other options given in these documents – create, enhance, preserve – seem to have been forgotten.

In addition, on woodland nature reserves and other public wooded spaces, the public perception is that these should be left alone, and that high forest is best. There is undoubtedly an argument for leaving some areas wild, and ancient woodland and veteran trees undoubtedly support a very biodiverse ecosystem, but leaving everything alone will result in a closed canopy woodland with lower diversity than a managed woodland that includes ancient and veteran trees. People don’t like to see trees being cut down, so managers of public land don’t cut them down – it is the easiest option. It would be lovely if areas of woodland were extensive enough to allow natural processes of regeneration to take place – but few sites are large enough. The average size of a piece of woodland in England is about 8ha. So the management methods that create scrub are not being carried out, nor is scrub being created naturally. At the same time, people are receptive to the idea of clearing scrub – the combined effect is that scrub is reduced in extent and diversity, and often confined to margins of roads and railways, and to derelict urban sites awaiting development. 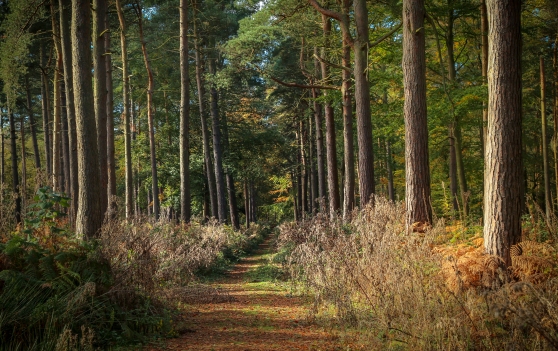 High Forest – the popular perception of what woodland should be like

We hardly ever see the word “scrub” in management plans for nature reserves unless it is followed by the word “clearance”. There are clearly habitats where scrub needs to be cut, or it will overwhelm other valuable and vanishing habitats, but it is really important to ensure that an area of scrub is left, and managed on rotation, so there is always somewhere for scrub species to go. There is a need to question whether complete scrub removal is required. Areas of scrub also need to be left in urban and suburban green spaces. They are amazing places for children to explore, and learn, as well as being repositories of wildlife. They may not look tidy, but neither do uncut road verges – yet many councils are taking up Plantlife’s campaign to leave some area of verge to grow wildflowers, so why not take up the cause of scrub, and leave some areas of urban parks to develop as scrub habitat?

There seems to be a real need to educate people as to the value of scrub, and the related woodland coppice habitat, so that they can understand the need to keep some scrub, and to create coppice. To do this, the mindset that cutting down trees is “bad” and clearing scrub is “good” needs to be changed. In addition, there needs to be support for scrub habitat – not just the specialised communities in rare scrub habitats, but good old-fashioned lowland scrub – within stewardship schemes, woodland grant schemes and within urban and suburban green spaces.

Not all scrub is bad. A lot of species depend on scrub, and on an ever-changing and evolving patchwork of vegetation from open meadow to high forest, and everything in between. The in between bits are important. Scrub is important. Save our Scrub! 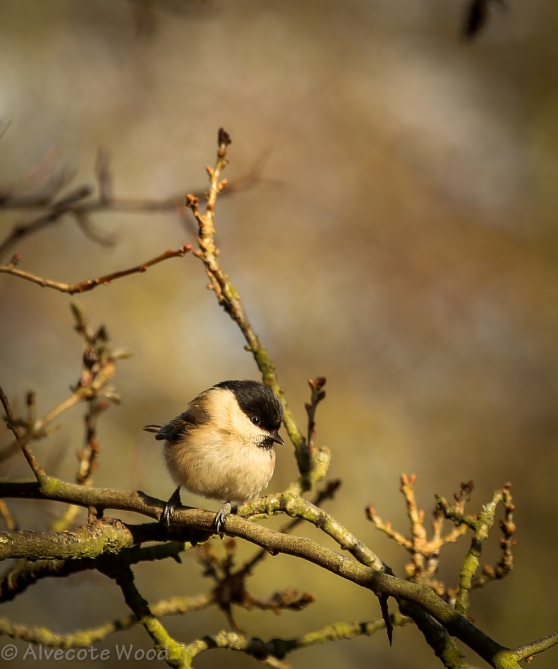 Willow tit – a red-listed species that depends on scrub habitat

Fuller RJ and Warren MS (1995) – Management for Biodiversity in British Woodlands – Striking a Balance – from British Wildlife (1995): 7; 26-37 – Available from http://www.britishwildlife.com/classicarticlesview.asp

7 thoughts on “Scrub is Special – Save our Scrub”